JACA is a U.S.-based non-profit charitable 501(c)(3) organization working with the AKC, UKC and World Union of Akita Clubs (JKC/FCI).

These guidelines are in accordance with the objectives of the Japanese Akitainu Club of America, Inc. (JACA), and are set forth to protect and advance the interest of our breed by maintaining high breeding standards. The JACA underwrites these standards and encourages all breeders to abide by them. 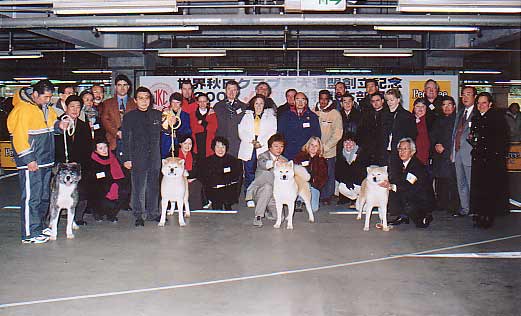 History of the Japanese Akitainu Club of America

In the mid-1990s, the debate in North America on whether or not to split the Akita breed was raging over Internet forums, e-mail lists, at ringside and just about every other place Akita fanciers might gather; it was bitter and there was no solution in sight. Lines were drawn between the pro-split side and the anti-split side.

IT STARTED WITH A TRIP TO JAPAN

In April of 1997, Akita breeders Pat Szymanski of Akasta Akitas, Ben Herrera of Kobun Akitas and Jim Sjoberg of Hyozan Akitas attended an Akitainu Hozonkai (AKIHO) Headquarters show in Odate, Japan, where they spoke to well-known and respected AKIHO judges and breeders. In addition, they were able to observe for themselves over 200 Japanese Akitainu at one show. These Japanese Akitainu were, in fact, very different from the majority of Akita commonly available in North America. It became obvious to these breeders from the US that in the course of development over previous decades when the AKC closed the stud book, the Akita had indeed become two separate breeds: the Japanese and the American. This situation was not taken lightly by the Szymanskis (Pat and Rich), Herreras (Ben and Melanie) and Sjobergs (Jim and Carol) as they all had experience with both American Akitas and Japanese Akitainus and had struggled with the split issue themselves. But with the irrefutable evidence in front of them and with the knowledge that the Japan Kennel Club (JKC) preferred to split the breed internationally, they knew they had to respect the breed’s country of origin.

Shortly after their return to the US, the Sjobergs and Szymanskis sat around Pat’s kitchen table in a suburb of Houston and called the Herreras, who were then living in Southern California. They had “the talk” which would ultimately result in the formation of North America’s first club dedicated to the Japanese Akitainu outside of AKIHO’s North American Branch, which was established in 1970. It must be noted that AKIHO, the oldest Akitainu breed club in the world, operates independently and is not affiliated with any other national or international registry or kennel club.

Internationally, various individuals of the Japanese Akitainu fancy stated that the breed would need a representative club in the United States, and there was a growing worry that the AKC would stall the split on behalf of a particularly vocal group within the Akita Club of America (ACA), the breed parent club. In fact, as of this publishing in 2017, the AKC continues to be one of only two kennel clubs in the world that does not recognize two distinct Akita breeds.

And so, in May of 1997, with encouragement from board members of the JKC, AKIHO HQ in Odate, AKIHO North American Branch, and Japanese Akitainu clubs in Europe, the Japanese Akita Club of America, Inc. (JACA), was founded by the Szymanskis, the Herreras, the Sjobergs, Cindy and Jim Hicks, Mike and Laurie Shannen, Frances Connor, Akira Miyabayashi and Hope Yoneshige. Also, it is important to note that several members of the ACA believed in preserving both breeds as separate, so among JACA’s first members were breeders and owners of American Akitas.

Since our formation in a country whose main national kennel club still does not recognize two breeds, JACA’s role as the parent club in the international Japanese Akitainu enthusiast community has spoken volumes. JACA was the ONLY Akita club from the United States to be invited by the JKC to participate in their very first Akita Judges’ Special Seminar held in Tokyo in January of 2001. The delegates from JACA enjoyed meeting Akita judges from around the world and the seminar itself proved very educational and informative on a variety of subjects. We have also been a consistent presence at the World Akita Conferences held by WUAC and maintain great working relationships and friendships with our counterparts in Japan, Europe and Latin America.

Although JACA has held conformation shows for the breed since 1998, most often in conjunction with the AKIHO North America Branch, it wasn’t until 2012 when the inevitable would happen. The United Kennel Club (UKC) recognized the Japanese Akitainu and designated JACA as the parent club of the breed in the US. Under the auspices of the UKC, anyone with a registered purebred Japanese Akitainu is able to compete in UKC conformation shows across the US and Canada, while JACA has hosted Specialty shows in previous years and more currently hosts an annual Invitational show in Southern California. The AKC admitted the breed into their Foundation Stock Services in 2020.

Over the years, JACA has proudly retained its close ties to the JKC, AKIHO and WUAC. We have also had the privilege of being designated as the representative club for the breed in America by many Japanese Akitainu clubs overseas. In fact, our membership has spanned across several continents as our international friends support our efforts here in the US. Moreover, we continue to enjoy the camaraderie of members who are devoted to their American Akita, for they too wish to preserve their own breed.

For club business and general inquiries from non-members, our secretary may be e-mailed at info@akita-inu.com.

If you represent a rescue organization that deals specifically with Japanese Akitainus and wish to learn more about our JACA Cares program, write to us at rescue@akita-inu.com. (Please keep in mind, we do not pull, foster or place dogs; we leave that to the rescue experts).

JACA Area Reps are members kind enough to volunteer their time and energy to organize official events and informal activities in their respective areas (some events may be held in conjunction with AKIHO North America).

Southern California and Southwest US (So. Cal, Hawaii, Nevada, Arizona and New Mexico): Hope and Sean, Hope@akita-inu.com or Sean@akita-inu.com

JACA Board of Directors

If you’re in search of a responsible breeder, please have a look at our Breeders Directory page which contains listings for JACA-member kennels and their contact information.

JACA members are newcomers and experienced pet owners, breeders, conformation and competition dog owners and puppy wranglers. Please note that our new membership process requires sponsorship from two current eligible members. How do you meet members? Attend our shows, events or meet-ups (follow us on our Facebook page), adopt from an Akitainu rescue, get a puppy from one of our breeders, or get to know our members through their social media accounts (#JACAMember).

Find out how
error: Alert: Oops!